"We are using technology that was originally developed by NASA for satellites observing the earth." 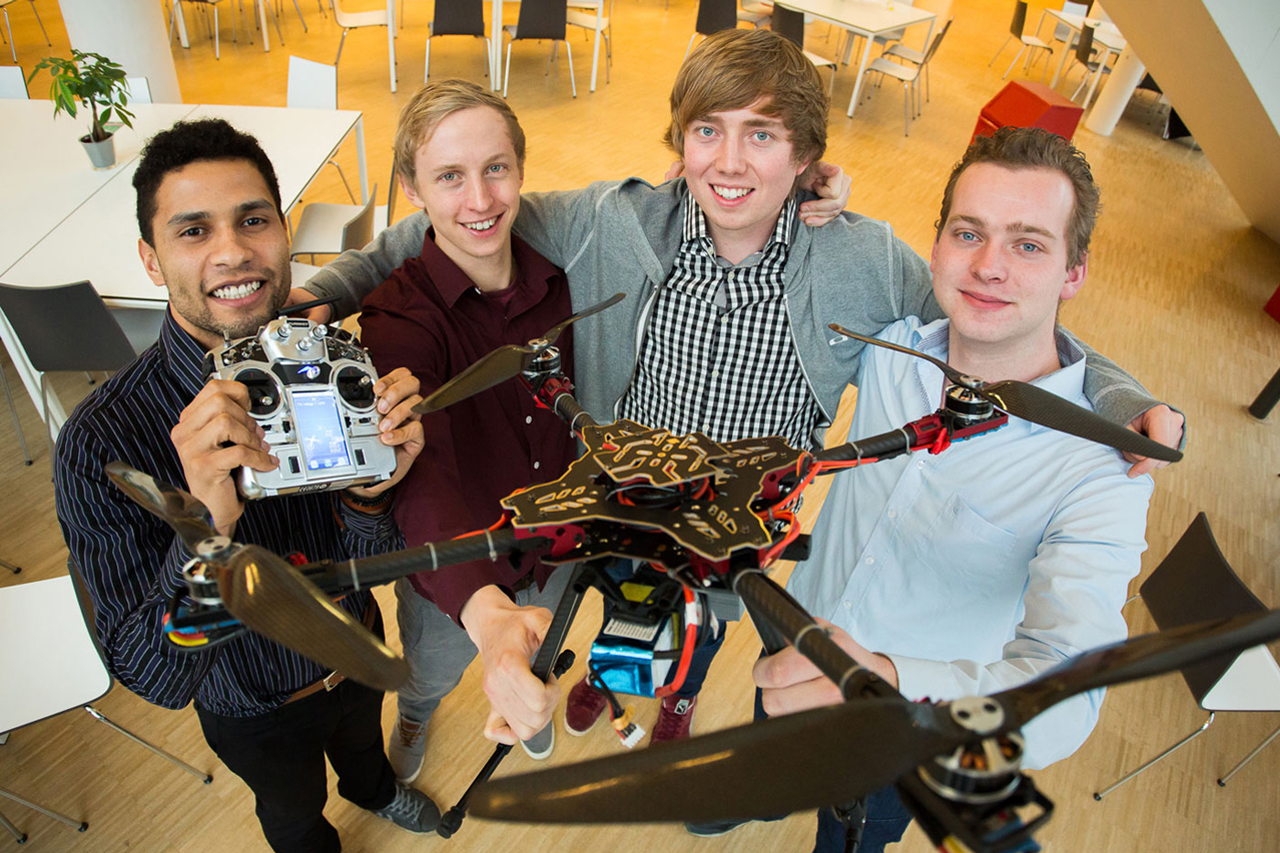 Drones in the Greenhouse

The greenhouses used for cultivation under glass are extremely large. Checking the health of the many thousands of plants they contain represents a major challenge, while up to one quarter of all stock is lost to diseases and fungi. The four Aeronautical Engineering students at Inholland Delft currently working on the Drones in the Greenhouse project envisage a solution in the form of a drone capable of flying through the greenhouse and analysing the plants.

Project team members William Simmonds, Bram Sanders, Chris Ramsay and Lucien Fesselet decided to introduce drones in the greenhouse for a very simple reason, as Lucien explains: 'Greenhouses are extremely large, and it is difficult for growers to check the health of the many thousands of plants. Hiring the necessary staff is expensive.' However, regular inspections are absolutely crucial. Between five and 25 percent of all plant stock is currently lost to diseases, bacteria, fungi, damage and other causes. Lucien: 'It takes three days for the effects of plant diseases to become visible to the naked eye. By that time, it is already too late as the disease may already have spread.'

Infrared camera
The changes in sick plants show up on infra-red cameras after only a few hours. Although growers could potentially install dozens of infra-red cameras in their greenhouses, such a solution would be costly. 'Our drone is only equipped with a single camera, but it can inspect the entire greenhouse in a very short space of time.' It also features various sensors that can measure the local climate around each plant: humidity, clearness, temperature and CO2 level. All data is then analysed by means of dedicated software. Programming thus makes up a key component of the overall project. Lucien: 'We learned how to programme over a period of ten weeks. We went from zero programming experience to a great deal of experience. It has been an extremely valuable process, and I have learned a great deal.'

Software for satellites
The students are currently evaluating the interpretation of measurement data. Are the measured values accurate? What do they tell us about the plants' condition? How can the software be used to offer growers clear insight into this information? 'We are using technology that was originally developed by NASA for satellites observing the earth', Lucien explains. 'However, our application requires a large number of adjustments.' The students will initially focus on strawberry plants, and subsequently move on to other crops. Each plant has its own 'light signature', necessitating tailor-made software. The students are currently working to develop an automated flight mode, as computer controlled drones are far more accurate than manually controlled ones.

Limitless possibilities
Development of the drone involves the combination of innovative hardware and software, making for a challenging and meticulous process. Nevertheless, the participating Aeronautical Engineering students have great confidence in their product. Several growers have already shown interest in the new drone. Lucien: 'We are collaborating with Bunnik Plants, which supplies potted plants to IKEA stores throughout Europe. The company has large, highly advanced greenhouses. Despite their high-end facilities, they are currently still throwing away large amounts of plants and use pesticides to control diseases. We can offer them a far more sustainable, targeted solution.' Unsurprisingly, Bunnik Plants welcomed the four students with open arms. The new drone has limitless applications, and the Delft-based Drones in the Greenhouse project appears to have the potential to revolutionise cultivation under glass.