Destination Development: how to move tourists beyond the city centre? 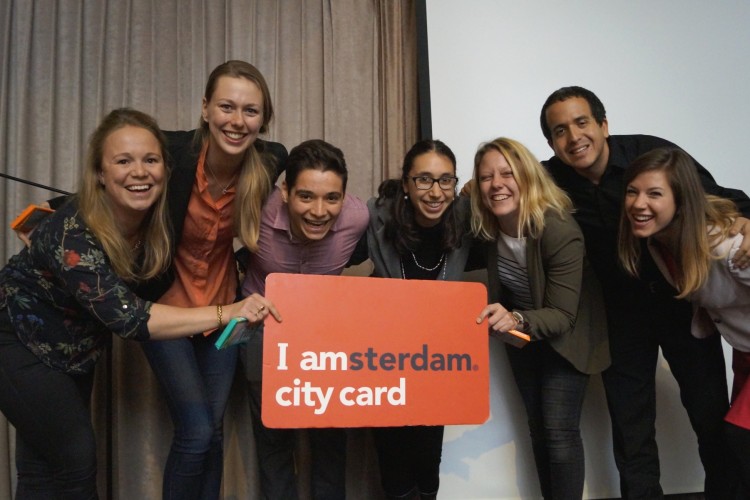 Increasing numbers of tourists are visiting Amsterdam. Inhabitants complain about overcrowding and the municipality is desperate for solutions. For the minor Destination Development, students of the tourism programmes Tourism Management (TM) and Hoger Toeristisch en Recreatief Onderwijs (HTRO) came up with innovative ideas to move tourists beyond the city centre of Amsterdam. They presented their findings to expert judges at Inholland Diemen.

Opportunities in the Flower Strip
The project group ‘Flower Area off the beaten track’ saw possibilities for Flower Strip visitors between 45 and 65 years old. They can visit greenhouses, but also go to Keukenhof Castle. And what about beautiful cycling trips? Students spoke to local residents to learn more about their preferences. “Some people think tourism is great, others do not appreciate it”, summarized one project member. The hospitality sector reacted positively. Not surprising, as their restaurant will be included in the trips. In return, they’ll sponsor the concept.

Sport and culture
Other groups also conducted interviews with stakeholders. ‘Buurtsport’ investigated the possibility to let business travelers and locals buddy up for a workout in the city district Buitenveldert. To examine the feasibility, they approached sports clubs and travelers. Project group ‘Globerunners’ also focused on facilitating connections in sport. They suggested an app that encourages local and overseas runners to hit the pavement together in the city district Indische Buurt. For ‘Bean in Amsterdam’, coffee beans were the connecting factor. Because what’s better than having a chat over a cup of coffee? Plenty of trendy coffee bars are currently opening their doors in De Baarsjes, a city district which is usually off the beaten track for tourists.

For foreign culture lovers, ‘Authentic Haarlem’ came up with a tour of cultural and historical highlights in Haarlem. The accompanying app tracks visitors with GPS and provides personal commentaries by proud habitants of the city. In a special bookshop, for example, the owner tells the history of his shop; information which you cannot find on Wikipedia. Project ‘Old Holland’ led tourists to the city of Alkmaar and its surroundings. “Older Germans have already discovered this city, but young people remain hard to reach”, according to a student.

Thinking out of the box
Project groups ‘Authentic Haarlem’ and ‘Globerunners’ reached the semifinals. During detailed presentations they described their market entry strategy. Afterwards, the public challenged them with questions. Many questions were about (financial) feasibility and marketing, two important and challenging aspects. The judges unanimously agreed that ‘Globerunners’ had the soundest concept, which simultaneously stood out due to its simplicity. “It’s very inspiring to see the solutions of outsiders who can think out of the box”, says Olivier Ponti of Amsterdam Marketing. He handed the winning students the I amsterdam City Card, which gives them free entrance to museums and attractions.

Destination Development: how to move tourists beyond the city centre?