When did student Nigel Vrede have his learning experience? 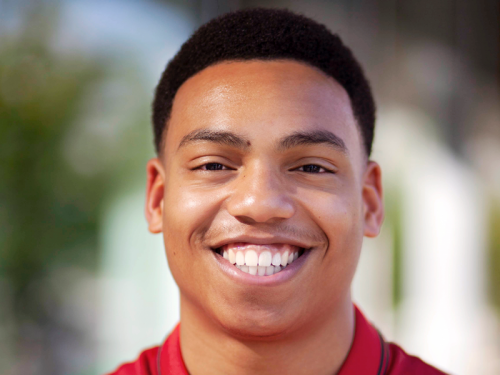 He was four years old when he went with his parents to Schiphol airport to pick up his grandmother. What Nigel Vrede (20) saw on the Panorama Terrace that day overwhelmed him so much that he never wanted to leave. Twelve years later, he did not hesitate for a moment: he wanted to study Aeronautical Engineering at Inholland University of Applied Sciences in Delft. Although he is now working on his graduation project, plane fanatic Nigel is still far from done learning! How does he look back on his years at Inholland and how does he ensure that he always remains upbeat and motivated?

When the alarm goes off, Nigel rarely turns over again. ‘Every day you have a choice: am I going to make the most out of today, or am I going to stay in bed? As long as you look at your tasks with a positive attitude, you’ll succeed,’ Nigel believes. He is now in the final phase of his graduation project, which is not always easy: ‘If I get up early in the morning, I’ve already done a good deed that day! Sometimes it’s quite difficult to graduate from home, especially because Aeronautical Engineering is one of the most difficult technical studies. When I speak to fellow students who talk about wanting to give up, I try to explain to them that every day you make a choice for yourself: will I continue or will I give up, and that you should always approach things in a positive way.’

Exercise for an energy boost
In addition to graduating, ball of energy Nigel is also active as a sports instructor: ‘Sport helps to improve your concentration. I notice it when studying.’ In the first year of his studies, Nigel was somewhat less sporty: ‘I had one goal back then: completing my first-year programme. My lecturer always said: look at your neighbour – only one of you will be left at the end of the year. I was 16 and took his words very seriously. I hardly saw my friends either. In my second year, I learned to plan well, which gave me more free time. Now I play sports three times a week, which gives me positive energy. After I’ve exercised, I’m ready to go again!’

Passion for planes
Nigel lives with his mother in Rotterdam. He has been studying at home for more than a year. His passion for planes is reflected in his room: ‘I’ve painted my room KLM blue. It helps me stay motivated.’ Nigel’s first talk at school was about planes and it has been the central theme in his life ever since. Initially he wanted to become a pilot, but soon Nigel discovered that there is much more to learn about planes than just how to fly them: ‘My secondary-school project was about what makes planes fly. That opened up a whole new world for me and that’s why I went to study Aeronautical Engineering in Delft.’

Studying and having fun all at once
‘I went to Inholland to learn and to have fun. And I did! I’ve learned that the energy you radiate is also the energy you get back. When I approached my teachers with a positive attitude, they returned positive vibes as well.’ Nigel discovered the flight simulator at his school: ‘I went there every spare hour to fly a few laps. Later on, I was allowed to work there as an instructor. I didn’t know that there was so much fun to be had alongside my studies. I’ve become a more fully rounded person at Inholland and have really made the most of my time here. In four years, I’ve learned how important it is to keep developing and improving yourself and that you have to step out of your comfort zone to achieve something.’

I didn’t know that there was so much fun to be had alongside my studies. I’ve become a more fully rounded person at Inholland and have really made the most of my time here.

Looking back on the first lively co-creation session ‘Why internationalisation?’
Dance marathon for and by students at Inholland The Hague
How inclusive is Inholland for our international community?
Corona measures relaxed: Universities are opening up
Welcome for international students Inholland Haarlem
‘I want to collaborate to develop more sustainable digital media’