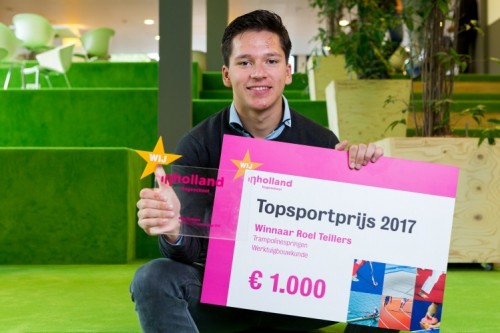 Inholland Executive Board members Huug de Deugd and Marcel Nollen presented the prizes during the official opening ceremony of the academic year at Inholland Alkmaar on Thursday, 7 September.

'It's fantastic; this is going to be a true entrepreneurial start-up,' is what Nollen had to say about the team behind GOWind systems, which snagged the prize for best student project. With regard to Top Sport winner Roel Teillers, Board member Huug de Deugd stated that 'I admire the fact that, in addition to your sporting achievements, you also managed to complete the propaedeutic phase of your programme in just one year.' The jury emphasises the fact that Roel is a promising trampoline gymnast. 'It's always a major challenge to combine a higher professional education programme with your greatest passion, sports, and to successfully complete your degree. Roel is well on his way to realising this goal.'

Winners of the Wij Inholland Student project award
With their GOWind systems, students from the Aeronautical Engineering programme at Inholland Delft are responding to the demand for green energy. They developed a vertical wind turbine to generate energy for office buildings and flats. Ruby Jane, Casper and Kim accepted the award on behalf of the project group.

'We are all very excited,' Casper said. 'With this prize, we'll be able to really get started on a prototype that will enable further development of our product. This is a fantastic springboard that will give our idea a boost and help us apply it in practice.' Kim added that observing the amount of interest in their project has been an overwhelming experience. 'It was quite evident from the number of votes we received. With all those interested parties and potential partners, we will hopefully be able to take the next step as well.'

Wij Inholland Top Sport award winner
Despite his young age, Roel (19) has earned a steady spot on the national team. He has also racked up a number of exciting victories, both individually and in team events. Internationally, he is well on his way to a great career. Together with his team, Roel claimed the title at the Dutch Trampolining Championships four times in a row. He earns excellent marks and spends about 25 hours in training each week. 'The discipline I need to be a top-class athlete has proven very useful in my studies as well,' according to Roel. 'This has been a fantastic year, where everything has just fallen into place. I've performed well in every area and I'm really pleased about it.'

Honourable mention
Romana Schuring was nominated for the award for the fourth time. 'We deeply admire her perseverance. After a dip in athletic performance, Romana is back at her previous level. She is among the nation’s top athletes and is a fixture at Dutch Championships and international competitions,' according to the jury. She will graduate from Inholland Haarlem this year, with a degree in HRM. Today, in light of her determination and perseverance, the jury rewarded her with an ‘honourable mention’ and a cheque for 250 euros.

Other nominees
The IamStudent and Travel Smart student projects fell just short of first prize for the Wij Inholland Student Project award. The Tourism Management students came in second with their effort, 'IamStudent'. They created a five-day city trip for international students, aimed at preparing them for their studies in the Netherlands. Third prize went to Travel Smart, an innovative web application designed to enhance online interaction with the target group; this project was created by Communication students at Inholland The Hague.

Wij Inholland
Wij Inholland gives students a platform where they can truly stand out by developing an innovative project. Alongside the coveted trophy, the members of the winning project are given support to help them develop their project further, such as access to a comprehensive network of companies in various sectors and promotional support.

Top Sport award
Another aspect of Wij Inholland is the Top Sport category. At Inholland University of Applied Sciences, top athletes have the opportunity to combine their career in sport with a degree programme in higher professional education (HBO). This may involve adjustments to the study programme, for instance. The winner of the Wij Inholland Top Sport award receives a cheque in the amount of 1,000 euros.