How robots will benefit healthcare, technology and horticulture 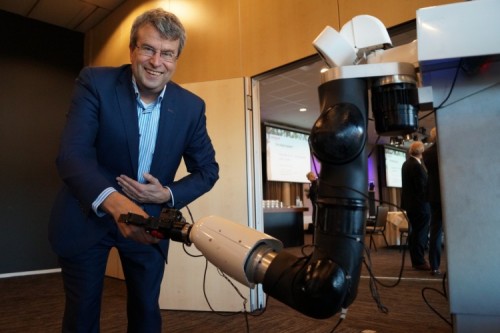 Are the robots coming? This was not only the title of the recent inaugural lecture by Cock Heemskerk, Robotics professor at Inholland, it’s also a highly topical question. And for audience members who on entering the hall in the AFAS Stadium in Alkmaar on Thursday were greeted by robots, the answer was clear: Yes, they are already among us! The afternoon provided a taster of Heemkerk’s aim to have the Robotics research group demonstrate the benefits of robots in the healthcare and agriculture sectors.

Since May 2016 Cock Heemskerk has been working in the Robotics research group at Inholland University of Applied Sciences, part of the Research and Innovation Centre in Technology, Design and Informatics (RIC-TOI). On Thursday he used the home base of the AZ Alkmaar football club to present the future plans of the research group and was officially appointed as professor. Dirk van der Bijl, director of Inholland Alkmaar and of the Faculty of Technology, Design and Informatics (TOI), got the ball rolling. ‘At Inholland we like to use the educational concept of the “knowledge factory”, where education and the professional sector are brought together. Robotics is fantastic field for putting this principle into practice’, he said.

‘I’m looking forward to seeking cross-connections, especially in the provinces of North and South Holland, with companies and with other institutions, such as Regional Training Centres.’

The benefits of robots
‘The Robotics research group puts the focus on practice-oriented research’, explained Cock Heemskerk during his inaugural lecture. ‘By the term “practice-oriented” I mean that I aim for the research group to demonstrate the benefits of robots. For horticulturalists these benefits could be, for instance, that they don’t need to throw away as many sick plants. Healthcare robots could enable patients to leave hospital earlier and to live independently at home.’ In addition, he said, it is important that the research group is embedded both in the curricula at Inholland and in the region. ‘I’m looking forward to seeking cross-connections, especially in the provinces of North and South Holland, with companies and with other institutions, such as Regional Training Centres.’

Collaboration between degree programmes
Heemskerk highlighted two areas of focus for the research group: the healthcare sector and the agrifood sector. In both, robots can make a crucial difference in terms of productivity and the wellbeing of people and animals. He cited a range of commercial, new and experimental examples during his lecture, such as animal-friendly milking robots and cuddly robots for dementia patients. Heemskerk said that the aim is to get the participating engineering degree programmes – Mechanical Engineering, Electrical Engineering and Computer Science – to collaborate even more closely in the robotics field with the Faculty of Agri, Food & Life Sciences. Links with the Faculty of Health, Sports and Social Work would be a natural progression as well. He also revealed that there are potential plans for a Master’s in Robotics at Inholland Alkmaar.

Greenhouses and healthcare institutions
A mini-symposium illustrated the broad range of applications for robots. Fourth-year student Lucien Fesselet (Aeronautical Engineering) held a presentation in which he demonstrated the promise of sensor-equipped drones that check the health of thousands of plants in large greenhouses. One of the goals that Lucien and his enterprising fellow students have is to enable the drones to fly autonomously. Further development will require time and money – things that they as students do not have enough of. A grant application is therefore now being prepared in collaboration with the professor. Mariëtte Hertoghs-Maartjens talked about promising trials with Rose, a care robot at Thebe Heuvel, a care institution for seniors. Meticulous preparation and good conditions are essential for this project.

Kicking the ball
Yanick Douven, a student at Eindhoven University of Technology and member of the TechUnited robot football team, gave an enthusiastic account of the RoboCup 2016 in Leipzig, where his team became the world champion in their category. Football matches between robots are not only fun to watch but also provide plenty of useful data for developing healthcare robots. Douven had brought along one of the football robots, which then kicked a ball around with Cock Heemskerk. Wrapping up the event, Inholland Executive Board member Huug de Deugd concluded: ‘As a university of applied sciences we aim to maximise our performance. We do that for our students, because want them to develop a questioning and analytical mindset that will benefit both them and their future employers. The new Robotics research group will help us to achieve this goal.’ He then presented Heemskerk with the ‘professor statue’, marking his official appointment as professor.

How robots will benefit healthcare, technology and horticulture
More news

In100 film Inholland The Hague
'The entrepreneurial mindset brings me great things'
'Creating sustainable change on the red carpet'
Doing business and studying? It's possible at Inholland!
Join the Community Day of the Sustainable Media Lab
Results of research on inclusion in sport shared at conference Haarlem