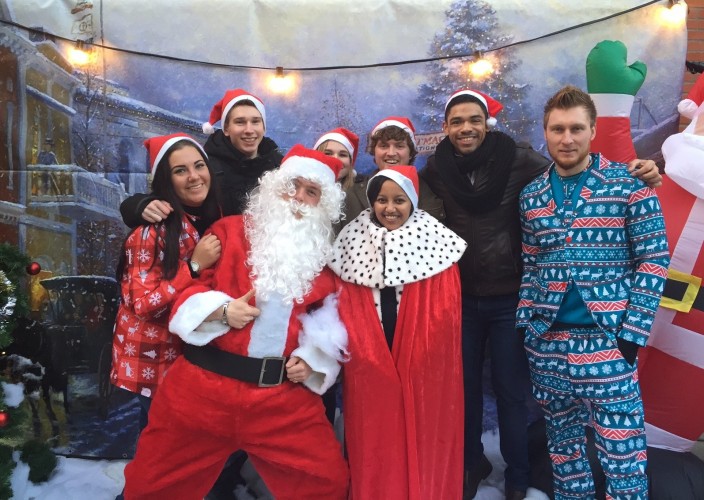 Christmas at Inholland The Hague

Tourism students join forces for a children's rights organisation, Christmas market at Inholland The Hague and lecturer published an article about eHealth and Big Data.

Tourism students join forces for Save the Children
Students of the Dutch Tourism courses (Hoger Toeristisch en Recreatief Onderwijs) in Rotterdam, Diemen and The Hague, collected €12.000 for children’s rights organisation Save the Children. As part of their minor, they recently organised numerous conferences and events in the StayOkay Hostel in Haarlem.

Christmas at Inholland The Hague
Hot chocolate, music and mulled wine: the Christmas festivities at Inholland The Hague are a wonderful tradition. Media and Entertainment Management (IMEM) students and cultural organisation ACKU organised a cosy Christmas market on the square in front of the building. Students made popcakes and visitors were able to take pictures in a winter setting. The stalls were manned by teacher training students who supported a project from the Edukans foundation. Save the Children was also present and promoted their collaboration with Inholland.

Ethical awareness in IT
Thijs Otter, lecturer Information Technology at Inholland Haarlem, published an article on the need to educate students about the downsides of eHealth and Big Data. “I believe that it is of great importance that we teach future IT specialists to look further than code and a graphic interface”, says Thijs in Digitale Zorg magazine. The human behind the data shouldn’t be forgotten. Developing ethical awareness is therefore a prominent part of the eHealth and Big Data module, besides the necessary technical knowledge.

Minister Bussemaker: breaking the taboo on depression in higher education
Councils can help to overcome the mental health stigma at universities, says the Minister for Education, Culture and Science. All students should feel safe to report something or talk about their mental health. "All universities and schools of applied sciences have one psychologist employed", according to the minister. She deems national standards for the number of psychologists unnecessary, but does want to highlight the importance of fighting the taboo. "A safe environment encourages people to express themselves, which can prevent possible worse issues", stresses Bussemaker.

IMEM-students launch campaign for fireworks show
Seven IMEM-students from Inholland The Hague developed a media campaign around the fireworks show on New Year’s Eve at the Hofvijver in The Hague. Commissioned by the city council, this assignment is the student’s first real project.