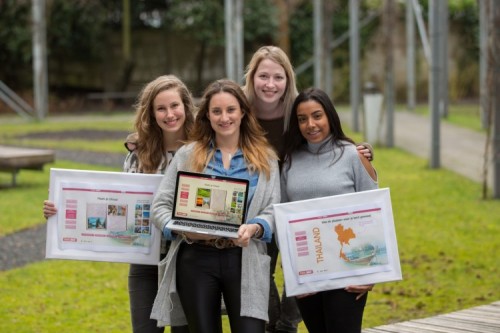 Lisa Unlandt, Debbie Vermeer, Zubayda Wazir and Naomy Braamkolk, four Communicaton students at Inholland The Hague, had a mission: to bring travel company Travel Smart and their customers together. And to do that in such a way to prompt potential customers to travel with them. The four students proposed an online passport allowing customers to create their own illustrated travel report.

‘Our client, Travel Smart, receives plenty of Facebook likes but would like more interaction with the people who book their trips with them’, says Lisa. The travel agency initially had a communication plan in mind but, self-assertive as they are, the four students suggested something better: an innovative web application. ‘This offers people an original way of sharing photos and short stories as a beautiful whole’, Debbie explains. ‘Pictures speak louder than words. We wanted to create a "feeling", partly because the attention span of people using social media is usually not very long. That is the reason that we work primarily with photos.’ The result: ‘Facebook users can imagine themselves in a different country, without having to wade through lengthy travel reports.’

Visually minded
Visual experience is pivotal to the online passport. It was essential that the web was in keeping with the house style, for example. ‘Luckily, all four of us are visually minded’, Naomy adds, ‘but the text must also be strong enough to appeal to the target group.’ Two test users kept testing the application until all the buttons were in the right place. As the website and the software are fully integrated, this ensured a smooth user experience. Debbie: ‘We really enjoyed working together with Travel Smart as they are a young company and gave us a lot of freedom to develop our own ideas.’

Hackathon
Another contributing factor to the success of the project was the hackathon organised by the Communication degree programme. A hackathon is an event during which developers of an app or appliance complete the building, testing and learning phases within a very short space of time. Immediate feedback allowed them to take rapid steps. ‘We were able to test and improve our prototype straight away’, Lisa explains.

Ambassador
The unique online passport provides the client with a wonderful tool. An innovative way in which their customers act as ambassador while also creating content which Travel Smart then uses to interact with them. Such that the company does in fact want to develop the idea. However, the web application is not ready to use yet. ‘We would like to carry on developing this product’, Debbie explains. ‘If we win the Wij Inholland award, we could use the support for the technical implementation of the travel passport.’