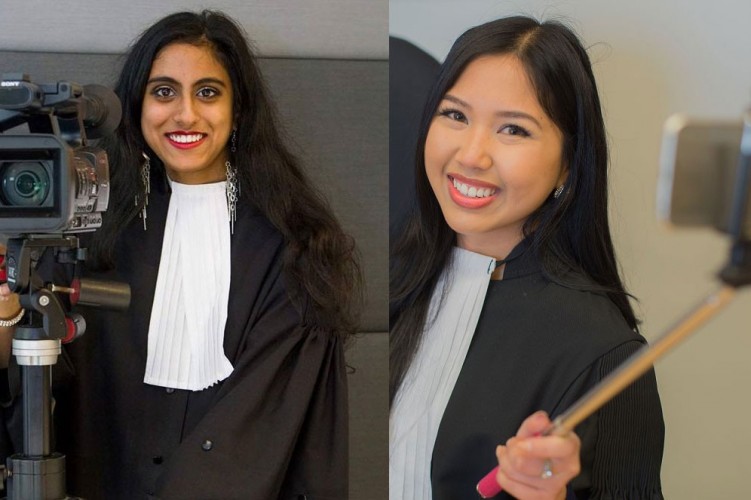 Vlogging and blogging to make the legal system more accessible to young people. Beatrix Darantinao and Muriël Nandkoemarsing in the HBO Law programme at Inholland Rotterdam have a new challenge. The fourth-year students have been named Rechtspraak Reporter (‘Justice Journalist’) by the Raad voor de rechtspraak (‘Council for the Judiciary’). ‘We feel it is important for young people to understand the judiciary system and we want to get them excited about it’, Beatrix said.

According to Muriël, the Council for the Judiciary was looking for enthusiastic students interested in online reporting to help young people navigate the world of law. Muriël: ‘Both of us were keen, and we applied immediately’. Beatrix added: ‘I made a video explaining my motive in which I introduced myself in a creative way and was invited for an interview with the staff members of the Council in Amsterdam’. As a result of the selection process, both students were appointed Rechtspraak Reporter (‘Justice Journalist’).

Vlogging about the law
The Rotterdam students each have a Facebook page that they use to share real-life examples involving the administration of justice and to translate legal terms into language that is easy to understand. ‘What makes this project unique is that it totally fits this day and age. Loads of young people use social media. I'm allowed to sit in on court cases and share my opinion in vlog form about the judge's decision’, Beatrix said.

Special privileges
Muriël, who has been chosen Justice Journalist for the second year in a row, mentioned that she has interviewed numerous judges and solicitors during the past year. ‘My favourite interview was with ‘Judge Joyce’, who shares the latest developments in the legal world on social media. Very educational; I'm rather shy but these types of interviews teach me to be open.’ In addition, Muriël attended several court cases and shared her experiences on a blog.

The law students receive many positive responses, and questions including why they became a Justice Journalist. Muriël: ‘I see that more and more young people are liking my Facebook page and becoming interested in the law.’ Beatrix mentioned that she recently attended a court case involving a young man who had committed an unusual crime. ‘He was accused of five crimes, including stealing chip sauce. I use subtitles and music in my vlogs keep young people's attention.’

As Justice Journalists, Beatrix and Muriël try to give the fairest picture of the law as possible. ‘We hold up a mirror to the employees of the law and are allowed to be critical if we believe that young people do not understand legal jargon’, Beatrix said. Together with 22 fellow students they will spend a year in the realm of justice and report on their experiences.