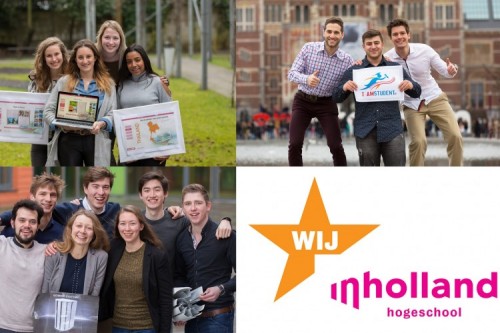 At the opening of the new 2017-2018 academic year at Inholland Alkmaar, the student projects GOWind systems, IamStudent and Travel Smart will be competing for the Wij Inholland award 2017. The public will select the winner on Thursday 7 September, on the basis of the promotional videos produced by the students.

GOWind systems
Seven Aeronautical Engineering students from Inholland Delft are responding to the demand for green energy with their GOWind systems project. They developed a vertical wind turbine which generates energy for office premises and apartment buildings, allowing people to live a greener lifestyle while also saving money in the longer term.

Travel Smart
How could the Travel Smart travel agency enhance the online interaction with its target group? Communication students Lisa Unlandt, Zubayda Wazir, Naomy Braamkolk and Debbie Vermeer from Inholland The Hague knew how and developed an innovative web application. ‘Images are more important than text in our application. We wanted to create a “feeling” as social media users have a short attention span’, says Debbie.

Wij Inholland
Wij Inholland gives students a platform where they can truly stand out by developing an innovative project. This year, a total of twelve student projects were selected by the expert jury. Six were given the go-ahead to pitch their project to the jury, who ultimately chose three finalists after much deliberation.

For the final, the members of each project produced a promotional video. The public will select one winner on the basis of these videos. Alongside the coveted trophy, the members of the winning project will be given support to help them develop their project further (such as access to a comprehensive network of companies in various sectors and promotional support).

Annual opening
The annual opening of the new 2017-2018 academic year will take place between 10 and 11.30 am on Thursday 7 September, at Inholland Alkmaar. The final of the Wij Inholland award can be followed live on the Inholland Facebook page from 11.10 am onwards.