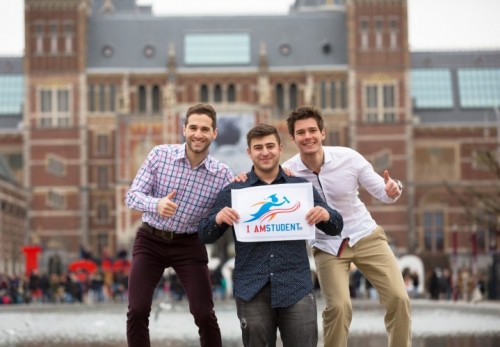 A new country, a strange language and culture, a different way of teaching … Studying abroad is fun and exciting, but it does require the ability to adapt. This also applies to foreign students here in our country. Avi Goldstein, Jason Zureineh and Kieran Litoux are three first-year Tourism Management (TM) students at Inholland Diemen. They came up with the idea of a five-day city trip to ‘immerse’ prospective Inholland students in the Netherlands.

Avi has an Israeli-Austrian background, Jason is Palestinian-Dutch and Kieran comes from France. The project developed out of Avi’s own experience. He already came to check out the Netherlands two years ago, as he was thinking about relocating here. ‘During the trip, I wanted to experience the culture, the language and the universities, but above all the general "vibe". It was a good way to prepare, because it let me know what to expect. The only thing is that I could have got more out of the trip if it had been supervised and organised more efficiently.’

Dutch language course
With their IamStudent project, Avi, Jason and Kieran ensure that foreign students quickly feel at home in our country. A ten-hour Dutch language course is a central component, as this helps the newcomers to develop self-confidence. The new students are also taken on a guided tour of cultural highlights in Amsterdam, as Diemen is near the capital. The project also teaches them how to navigate the bureaucratic maze of organisations and focuses on helping them to find a job (on the side) and accommodation. And of course, the prospective students can also take a look at their future study location. Avi: ‘All these things take place in an enjoyable, fun way, ensuring a good balance between education and pleasure.’

Everyone benefits
According to the group, there are around 75,000 foreign students at Dutch universities. Avi: ‘According to government estimates, around a quarter of them will spend the rest of their lives in the Netherlands once they graduate. Every year, they contribute 1.6 billion euros to the economy. Our initiative is therefore important for Amsterdam and the entire country. Everyone benefits when they feel at home sooner rather than later!’

Breaking down barriers
According to the project group, IamStudent is all about connecting students. ‘With our project, we aim to promote peace and break down barriers between nationalities, religions and backgrounds.’ And with their own diverse backgrounds, the team members are already putting this into practice. One package is aimed specifically at Dutch-speaking students on internationally oriented programmes. ‘There are quite a lot of them’, says Avi. ‘This brings them into contact with foreign students and means they can already get used to a new international environment before their degree programme has even started.’