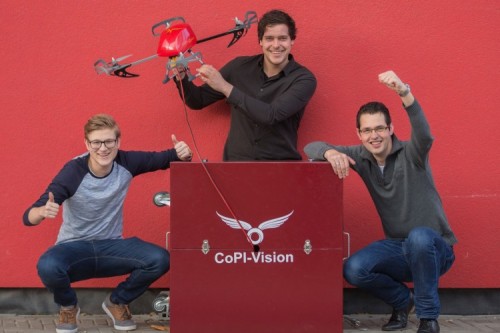 'One of the things our cable-operated drone can do is map the "heat spots" of a burning building more quickly and more safely than a conventional drone', Marco says.

The students initially approached several businesses and emergency services with their prototype, and they used the input they received to write a general business plan. 'The Haaglanden Fire Brigade showed the greatest interest. The firemen are unaware where danger lurks when they're entering a building in an emergency. Our drone provides them with an extra pair of eyes.'

The students discovered that the use of wireless drones carries risks and came up with a solution. 'The drawback of a conventional drone is that it isn't safe in case of a technical defect. If a drone crashes and lands on a person, the consequences can be very serious.' The students designed a prototype which is fastened to a cable and connected to a box with built-in components such as the cable mechanism.

The drone rises to a height of 50 meters and because it does not depend on a battery, can remain up in the air indefinitely. The development of the drone did not come about without a struggle. 'At first we could not get the drone off of the ground.' The students enlisted the aid of aerospace engineering firm Delft Dynamics, who recommended that they adjust the voltage.

'We're still refining our prototype, but in the event of an emergency the drone will be reeled in and brought back to the ground. We deliver the full package. The fire brigade can use the box under all circumstances, even in locations which lack an integrated power supply and can't be reached by ladder trucks.'