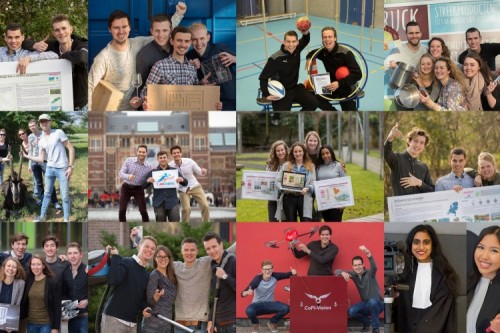 There's less than one week to vote for the Wij Inholland award! This year, 12 student projects are vying for the coveted 2017 Wij Inholland award. You have until 25 May to cast your vote on the website and put your favourite project on the way to the next round.

The following projects are taking part in the competition:

The five projects with the most votes will continue on to the next round, in which the students will give a presentation in order to convince the jury that their project deserves a place in the finals. There will also be a 'wild card' for a sixth project group that will be allowed to go on to the finals on the jury's recommendation.

The winner of the 2017 Wij Inholland Award will be announced at the official opening of the academic year at Inholland University of Applied Sciences on 7 September.

The winners
The winning project will receive a cheque in the amount of 2,000 euros and assistance to carry out their project. Amongst other things, the project group will be able to tap into a large network of enterprises in a diversity of sectors and get promotional support.

Wij Inholland
Wij Inholland is a project that seeks to bridge education and practice. It offers students a platform to distinguish themselves with an innovative project that ties in with the themes of either health, sustainability or creativity. Other criteria are that the project has to span multiple disciplines, create value for the region and collaborate with a company, agency or municipality.

Last year's winner of the Wij Inholland award was the 'Drones in the greenhouse' group, made up of Aeronautical Engineering students Lucien Fesselet, Chris Ramsey, Bram Sanders and Will Simmonds from Delft. Their project developed a drone that inspects greenhouse plants for disease.

Want to read more about the projects competing for the 2017 Wij Inholland award? Visit the website, and cast your vote!