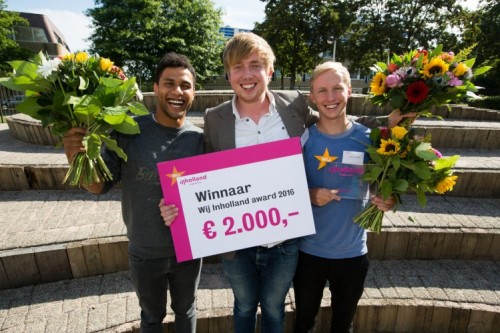 The winners Drones in the Greenhouse

Bram Sanders, Lucien Fesselet, Chris Ramsey and Will Simmonds are making a name for themselves. Last year, the four Aeronautical Engineering students at Inholland Delft proved this by winning the 2016 Wij Inholland Award with their 'Drones in the Greenhouse' project. This means that their student project was deemed the best of all Inholland by a jury. Winning the award led to a lot of advantages for the team, according to Bram and Lucien.

Greenhouses easily contain many thousands of plants. The grower has to throw away a large portion of these - up to 25 per cent - due to diseases and fungi. But a quick check of all these plants isn't that easy. With their company, Bram, Chris, Lucien and Will aim to market a drone which independently checks the health of plants using cameras and sensors. The students are collaborating closely with Bunnik Plants, a big name in horticulture. They can always use their greenhouses to test the drone. Lucien is very happy with this: 'We make the drone for growers like Bunnik Plants, so this is the best way to test it. They are also happy to help if we have questions.'

Step by step
At the end of 2015, the students decided to set up their own company: Applied Drone Innovations Ltd. (ADI). This allows them to cooperate with other companies more effectively. In 2016, they founded a branch in the Netherlands. The goals are ambitious: eventually, the UAS must be able to fly through greenhouses independently and gather usable data. The development of the drone is taking place step by step. Bram: 'In autonomous flying, we firstly focus on the altitude, which must always be the same, without us having to correct manually.' This thoughtful approach ensures that the students can focus on one challenge at a time. 'I compare it to the development of self-driving cars, which also happens in small steps, such as driving between two lines and braking autonomously.'


Promovideo Drones in the Greenhouse.

Looking for experts
The sensors and software can already see that a plant is less active, but the analysis has to be more precise. Bram and Lucien are working on this programming task, in addition to the engineering element. Team member Chris has a scientific background and is more the 'research guy', according to Bram. 'He's good at finding new techniques and perspectives. Will has the vision and the crazy ideas, he keeps an eye on the big picture and sets the course.' The team would like to attract experts. 'We can't do everything ourselves, and that's why we need experts in the fields of cameras, plants and drones', says Bram. In addition to Inholland, knowledge institutions like Wageningen University and Delft University of Technology are also involved in the project.

Team spirit
Winning the 2016 Wij Inholland Award has had direct, positive consequences for the project. 'After we won, everyone at Inholland knew about our project', says Bram. 'Many people were interested and wanted to know more about it. The cash prize connected to the award gave us the opportunity to buy new electronics and propellers for the drone. We also gained more publicity outside the institution, and that provided us with new and usable contacts.' Lucien adds: 'The Wij Inholland Award really contributed to the team spirit and our motivation. It was a confirmation that we're on the right path!'