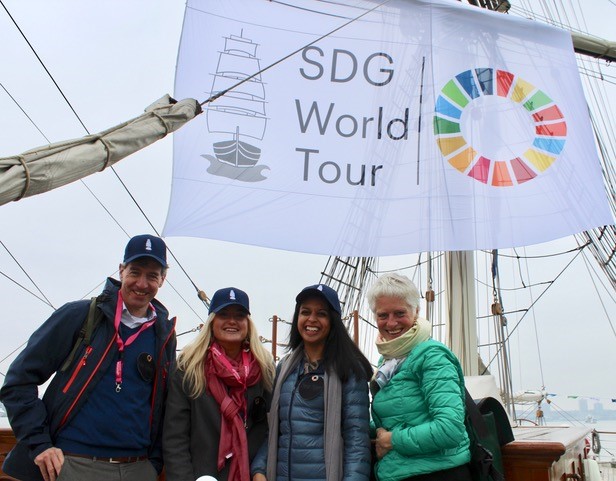 Students at the faculty of Creative Business in Diemen are working to contribute to the seventeen Sustainable Development Goals (SDGs) formulated by the United Nations in 2015. Students Charissa Rajaram and Mijntje Verkaik travelled to New York last month to attend the official kick-off ceremony for the SDG World Tour. They were accompanied by Philippa Collin, lecturer and researcher, and Reuben Wijnberg, team leader at Leisure & Events Management.

The SDGs, or Sustainable Development Goals, aim to ensure that the world is a fair, healthy and safe place to live by the year 2030. The first goal consists of ending extreme poverty. Other goals include aspects such as health, education, clean drinking water, renewable energy, reduced inequality and tackling climate change.

Clipper Stad Amsterdam
Over the course of the past year, Mitra van Raalten and other SAIL Amsterdam executives worked with a group of young people to develop the SDG World Tour, an initiative that will see three-masted sailing-boat Clipper Stad Amsterdam travel the world over the course of two years, visiting a total of seventeen ports. The trip should help raise awareness of the SDGs. This project will be carried out for and by young people (15-35 age group), with the support of older experts. The team will embark during SAIL AMSTERDAM in August of 2020.

Inclusiveness
Charissa is conducting her graduation project at SAIL Amsterdam. The event organisers aim to ensure that everyone feels welcome, regardless of their background – the emphasis is on internationalisation and inclusiveness. In line with these goals, the organisation is making major efforts to involve young people on a national and international scale. Charissa's graduation project centres on international students. She also spends a great deal of her studies focusing on sustainability policies, an issue now inextricably linked to the Tourism course.

Mijntje and her project group are conducting assignments for the SDG World Tour as a part of the Concepting & Events minor. Over the course of term 3, they submitted a proposal outlining how SDG WT could create an offline/online community at Inholland 'One of our ideas has already been adopted', Mijntje notes: 'SDG tv, a website that allows users to track Clipper Stad Amsterdam's voyage in real time. SDG WT found a New York-based documentary film-maker who was willing to help us run the project.' Mijntje's project group is currently organising an event for students at Inholland's Diemen location. The aim is to raise students' awareness of sustainability, healthier lifestyles and waste reduction.

We have the power, you have the know-how
The SDG World Tour kick-off ceremony in New York was held on board of the Clipper Stad Amsterdam. Visitors also received a guided tour of the United Nations building and attended various meetings. After a visit to the Dutch consulate where they had the opportunity to respond to ideas and prototypes presented by SDG WT and the European Space Agency, the guests took part in the Randstad Youth Employment Session. Attendees discussed the differences between job opportunities for young people in the Netherlands and US. Randstad linked this issue to SDG8: Honest Work and Economic Growth 'For example, you can't get insurance in the US if you're just starting a job as a window cleaner', Mijntje explains.

One young member of the SDG World Tour group summed up the relationship between the generations as follows: ‘We have the power, you have the know-how’. Philippa: 'That's certainly an interesting notion from the perspective of educational institutions! Young people represent the power of the future. They want to plant the seeds to safeguard that future now.

In Charissa's view, the initiative offers numerous springboards: 'The SDGs offer a lot of freedom; you're basically working on a large playing field. One good example would be goal 11, Sustainable Cities and Communities: this objective also covers the aspect of inclusiveness (every demographic counts – ed.) ! Mijntje adds: 'Each project group could concentrate on a specific SDG, formulating research questions in an international context. This means students would have immediate access to an international database of information and case studies.'

Rail tour
Inholland is a signatory to the SDG Charter. The university's education and research activities within the key themes of 'sustainable, healthy and creative' are seamlessly aligned with the SDGs. The SDG movement offers us a great opportunity to highlight Inholland's contribution in each of these areas. 'We could build on those efforts through various student initiatives', Philippa explains. Charissa adds: 'I could also see Inholland playing a role at the ship's ports of call. For example, we could organise events on land.' The SDG concept is a great source of inspiration. Philippa: 'We're considering organising our own SDG Tour: a rail tour of Europe, with stops in 17 cities. It's currently still just an idea, but who knows…'

Higher professional education is also aligned with the SDGs at a national level. Netherlands Association of Universities of Applied Sciences chairman Maurice Limmen signed the SDG Charter during the Association's annual conference on 9 May. Inholland previously signed on to the charter agreement. Inholland's contribution to the SDGs is reflected in the key profile themes underpinning our visions on Healthy Society, Sustainable Solutions and Creative Future.

'If you feel like you belong here at school, you'll feel like you belong in the world'
Full steam ahead for DragonFly despite coronavirus
Easing of measures 15 June: our education in practice
Bart Combee new Chairman of the Executive Board of Inholland UAS
Black Lives Matter
Need the library? Book an online consultation!
© Hogeschool Inholland