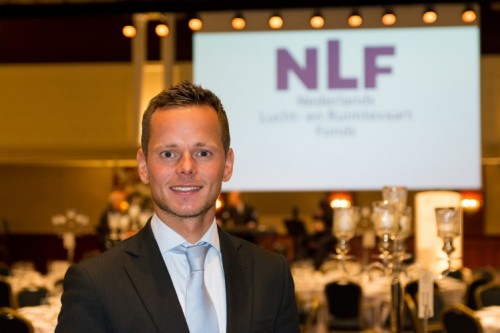 Menno van Ooyen, who recently graduated from the Aeronautical Engineering programme at Inholland Delft, was presented with the 2016 General Snijders Award during the annual gala of the Dutch Aerospace Fund (NLF) on Friday, 28 October. He received this annual aerospace award, worth 5,000 euros, for the ‘excellent fulfilment of his graduation project’. Working on behalf of Aeroworks Composites in Ypenburg, Menno developed a new design and manufacturing process for the backrest of economy class aircraft seats.

Menno conducted part of his graduation work and research in Thailand, where he subjected his prototypes to various tests. By utilising composite materials and integrating the ‘shroud’ (the cover panel at the back of the seat) with the other parts of the backrest frame, his design is not only lighter in terms of weight but also flatter and cheaper to produce.

‘Menno worked as a real jack-of-all-trades, carrying out various phases in the development process down to the finest details. And thanks to his proactive attitude, he played an effective connecting role between the engineers in the Netherlands and the production workers in Thailand’, writes the jury.

During his presentation at the NLF gala, Menno proudly presented ‘his aircraft seat’ to the audience. His final report had already received a high mark during his graduation, and now the excellent quality of his graduation project was confirmed again by the praise in the jury report.

The committee of the Dutch Aerospace Fund sees all the awards as a hallmark of excellence. The General Snijders Award is named after General C. J. Snijders, who is known chiefly for his great achievements in modernising the Dutch army on the eve of the First World War, his role as commander-in-chief during this war and his major contribution to the development of military and civil aviation in the Netherlands.

In100 film Inholland The Hague
'The entrepreneurial mindset brings me great things'
'Creating sustainable change on the red carpet'
Doing business and studying? It's possible at Inholland!
Join the Community Day of the Sustainable Media Lab
Results of research on inclusion in sport shared at conference Haarlem