Kickoff is on Friday 27 October at Inholland Delft 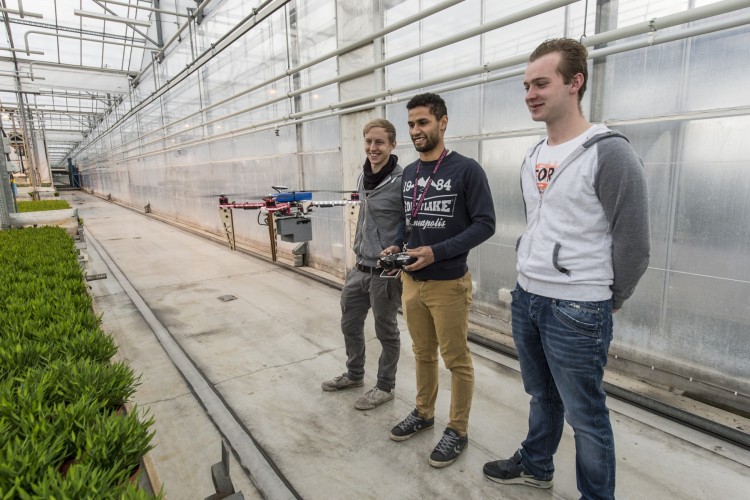 On 1 October, barely a year after they won the Wij Inholland award with their Drones in the Greenhouse project, Aeronautical Engineering students Bram Sanders, Chris Ramsay, Lucien Fesselet and Will Simmonds will start work on their new High Precision Greenhouse Farming (HiPerGreen) project. The project's sustainable objective is to help glasshouse growers produce a higher yield using fewer resources and raw materials.

The new project has been made possible thanks to a major RAAK SME grant of €500,000 from the national body for applied research, SIA. The project involves eight groups of lecturers and students from programmes in three faculties (Agri, Food & Life Sciences, Business, Finance & Law and Engineering, Design & Computing) and four Inholland locations (Delft, Alkmaar, Haarlem and Diemen). Inholland’s Professor Cock Heemskerk (Robotics) also plays a key role in the project.

'This project is an ideal opportunity for us both to expand our network and to continue to put our ideas into practice', says Lucien Fesselet. 'And, as young engineers, we are also delighted that we’ve been given the opportunity to take part in a project like this so early on in our careers. People normally take years to get this far! Looking back, winning the Inholland award has made a huge difference to us. We are really grateful for this.'

As part of their minor, the Delft-based students had developed a drone which could inspect plants in glasshouses for disease and, on the recommendation of their lecturer Martin Kampinga, they entered a competition to win the 2016 Wij Inholland award for the best student project. To their great surprise, they actually won the prize at the official annual opening ceremony of Inholland in Diemen on 1 September 2016. After the awards ceremony, Professor of Robotics at Inholland, Cock Heemskerk, told the delighted students that he would be happy to help them take the project further. The students invested their €2,000 prize in equipment such as cameras, propellers and motors to upgrade the drones.

The Drones in the Greenhouse project attracted international attention, and there were extremely positive responses from as far afield as Canada and South and Central America. The students were frequently asked to speak at meetings, conferences and lectures in the horticultural sector. They gave a fair number of demonstrations, amongst others for the floriculture association Floricode and the horticultural cluster Greenport Westland-Oostland. Thanks in particular to lecturer Hans Ligtenberg and Professor Olaf van Kooten (Sustainability in the Greenport Cluster), the students had a broad network at their disposal.

That was until Professor Cock Heemskerk said he would help the students apply for a RAAK grant. With Cock and Ragna Woodall from the Faculty of Engineering, Design & Computing as consultants, they began writing a project plan for the grant application. They received the go-ahead in July and the project started on 1 October.

"As young engineers, we are also delighted that we’ve been given the opportunity to take part in a project like this so early on in our careers. People normally take years to get this far!"

Kickoff of HiPerGreen
The kickoff will outline the approach and objectives of the HiPerGreen project. There will also be workshops, and a number of guest speakers will inspire attendees with state-of-the-art technology. For example, Jeremy Harbinson, a lecturer from Wageningen University, will talk about technology in the green sector. Arash Noroozi, CEO of ElpaNav, will speak about localisation using Bluetooth. Javier Nunez, an electronics engineer from AvioniCS, will explore the world of avionics control systems, and Pieter van der Hoeven, a lecturer/researcher from Inholland, will look at business strategies.

The kickoff will take place on Friday 27 October at 12.30 pm at Inholland Delft. If you’d like to be there, please contact Lucien Fesselet.