Computers. Pizza. Cola. Hot coffee and tepid energy drinks. Grunge and hard rock music. Coding. Hacking. Programming. A series of tough assignments. A countdown from ten to zero hours. And the stress levels rising at the same rate. In a nutshell, that’s the first edition of InHack 2018: a hackathon entirely organised by Information Technology students at Inholland Haarlem. 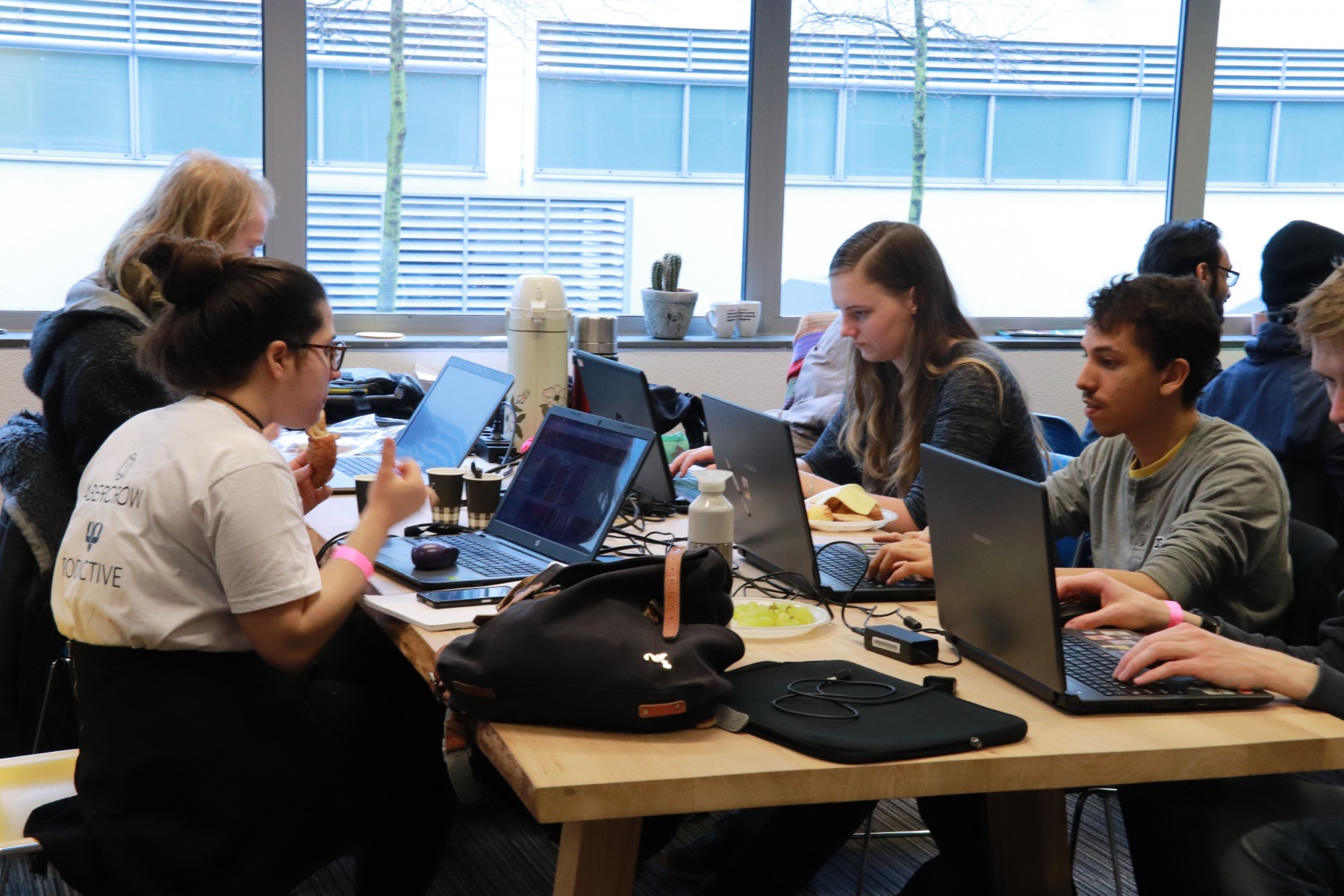 On Thursday 22 March, over thirty Information Technology students from Amsterdam (VU University Amsterdam and University of Amsterdam), Diemen and Haarlem (Inholland) met up at the Start Up Campus Haarlem (SUCH) premises. The first cups of coffee were immediately downed, the laptops flipped open and they got straight down to work. Ten hours to complete your project might sound like enough, but it really isn’t. Danuta Lapina, Information Technology student at Inholland Haarlem and one of the organisers of InHack 2018, explains: ‘A hackathon usually lasts several days. We wanted to have this time too, but it wasn’t possible to use the Inholland building overnight. In order to still achieve high-quality demonstrations at the end of the day, the team were allowed to do a lot of preparation. Everything in fact, apart from the coding. That really had to happen on the day itself.’

Three, two, one … GO!
InHack 2018 didn’t have a specific theme: the participating teams were able to decide for themselves what project they wanted to work on during the big day. From meet-up website for international students to time tracker, from time management app to game – the contributions were diverse. Just like the skill levels of the students. Everyone is welcome, whether you’re a seasoned programmer or a newcomer in the world of apps. ‘That works out, too, because the judges take your level into account when assessing the result’, says Danuta. The projects were judged on technical complexity, originality, functionality and degree of completion. ‘And on your presentation. So here’s a tip in advance: ensure that you have enough time to make a properly functioning demo. Come on, guys, let’s get to work!’ After this starting shot, the clock began counting down and the teams got down to hacking and programming in silence.

Creative ‘abuse’ of Windows
The job was done after ten hours. For most of the teams, at least ... Here and there people were still putting the finishing touches to their demo, jittery fingers on the keyboard. Time had come to close the laptops and present the results. The Plantnation team won the prize for the most innovative idea with an app that reminds you to water your plants. The KeyboardKings were the prize-winning team. Their multiplayer reaction-based game was the best technical design. And there was a special mention for the Patrick’s Late team, which ‘abused’ Windows forms in the most creative manner. The prizes were in part thanks to the sponsors Abercrow, IT jobs recruiter and Podictive, specialist in cyber security. At the end of the event Danuta Lapina was tired but satisfied. ‘We’ll certainly be organising it again next year. But then bigger and longer. At least three days and two nights. Whatever happens then ... believe me, it’ll be really great.’

Comments (0)
Thank you for your message.