Students devise concepts for the Sluis neighbourhood and North Amsterdam 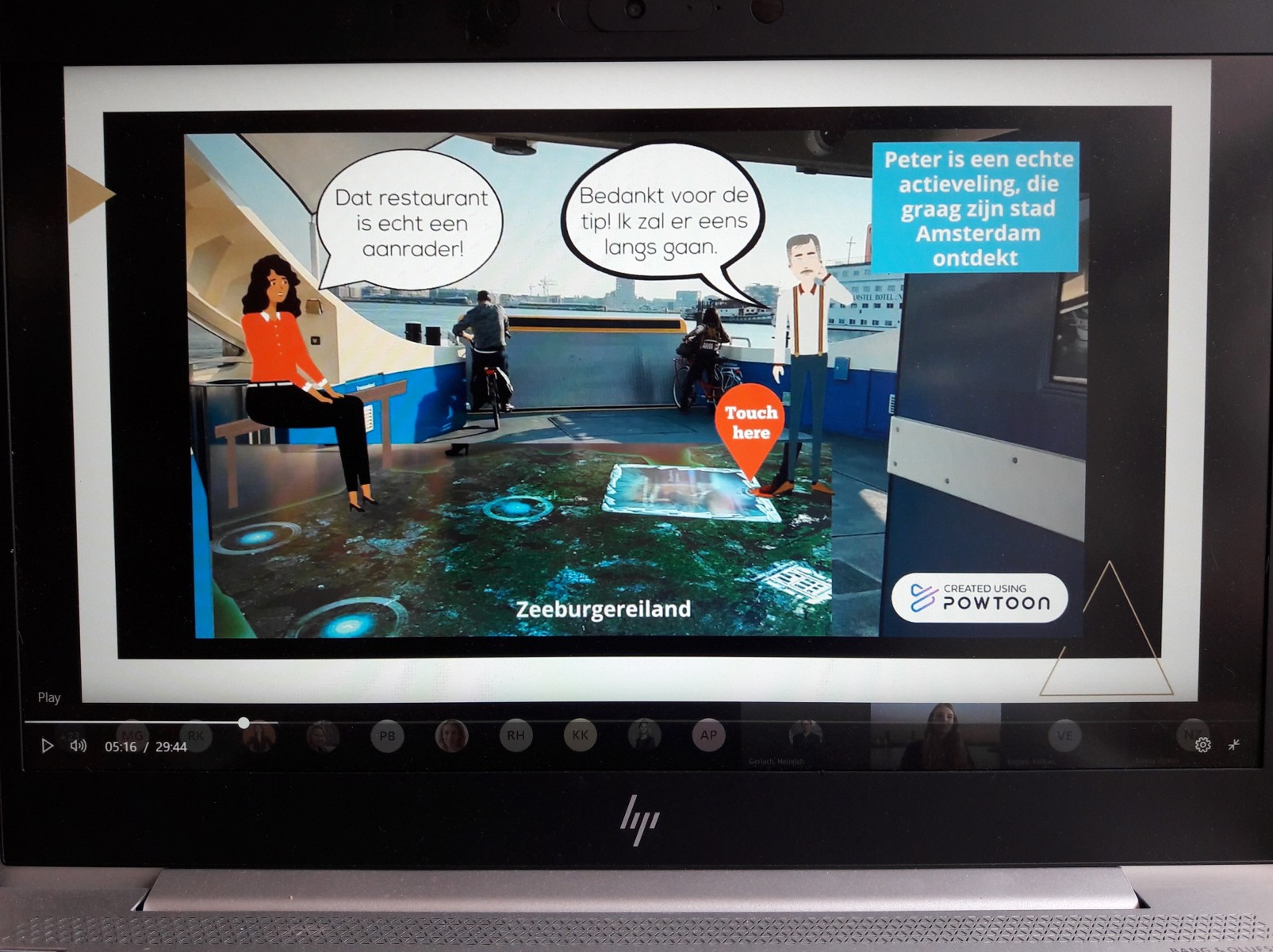 What further benefits could a potential temporary ferry connection between Amsterdam’s Oostelijk Havengebied or Eastern Harbour Docklands and Zeeburgereiland bring to the community other than a means of transport to ferry people to the other side? And how can you bring residents together using the ferry as a platform? Mixed teams of third-year students from various degree programmes were given the opportunity to mull over this ferry challenge or another complex issue.

Students who took part in the Creative Growth Initiative (CGI) SLUIS Lab, the Creative Growth Experience (CGE) SLUIS Lab and the CGE ULT Lab minors delivered amazing, sustainable connective concepts, as shown by the various online final presentations. Many of the student teams focused on issues relating to the Sluis neighbourhood on Zeeburgereiland, to which Inholland University of Applied Sciences in Amsterdam/Diemen will relocate in a few years’ time.

Social function
Good access is extremely important not just for Inholland students and colleagues, for instance, but also for neighbourhood residents and businesses planning to set up operations in the new district. It all starts with a ferry that will provide a temporary connection between the Eastern Harbour Docklands and Zeeburgereiland. The municipality of Amsterdam is already studying the possibilities for installing a temporary ferry line and the related infrastructure measures and products. But how great would it be if the ferry had a social function as well? Where neighbourhood residents can connect with each other? Two student teams mulled over this in the SLUIS Lab.

Team 1 consists of Nancy, Celine, Annemieke, Linda, Daniela, Bodil and Volkan, from the following degree programmes: AD Event Facilities Management, Tourism Management, Creative Business and Business IT & Management. They devised a concept consisting of two elements: a digiboard on the ferry, on which people can post a notice using their smartphone and a QR code, plus an interactive map on the floor of the ferry. 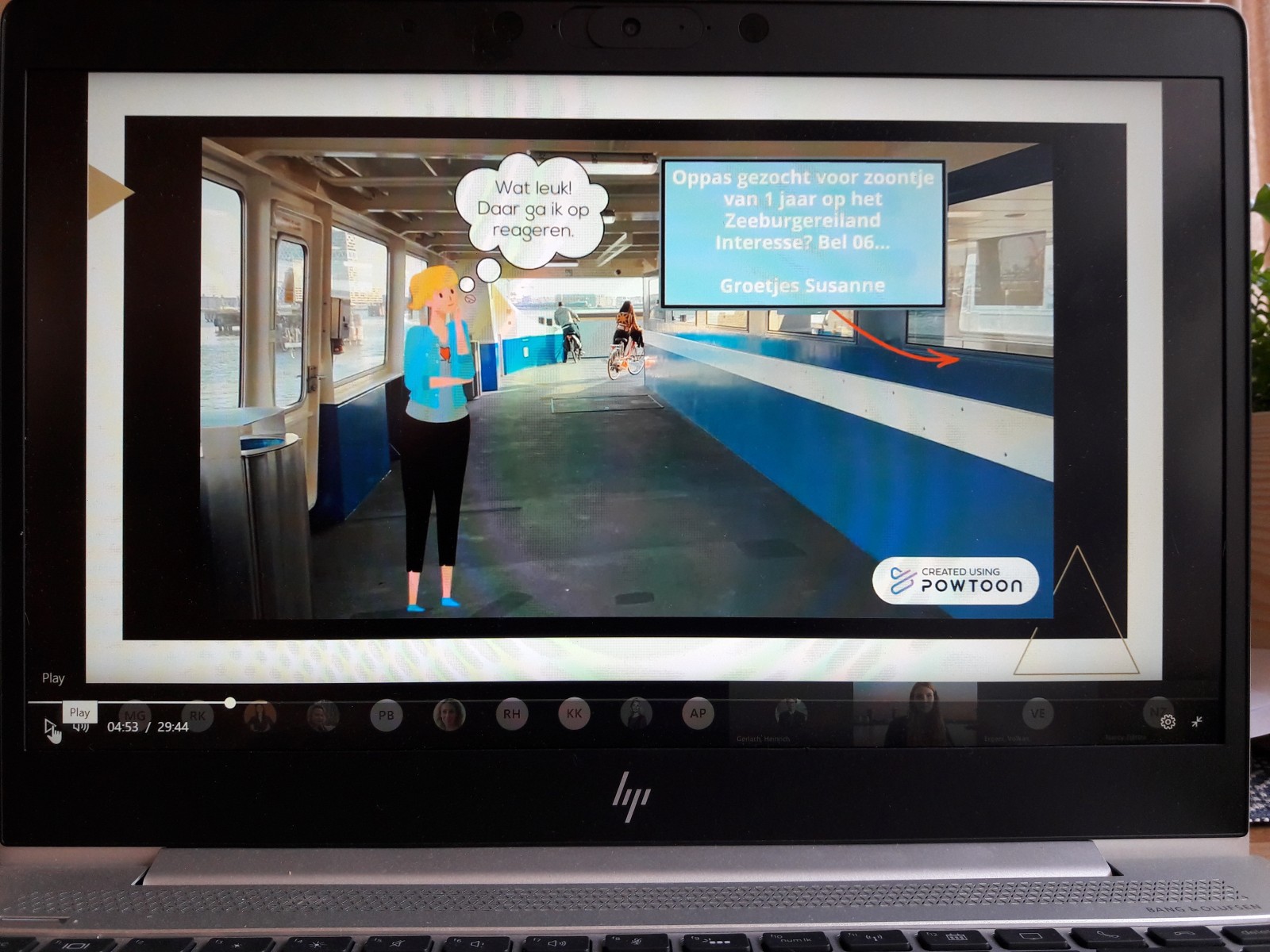 Notices
Annemieke explains what the concept is all about: 'All kinds of notices can be put up on a digiboard. A notice from a group of women, for instance, who are planning to set up a singing club and are still looking for members. Or a notice from a single mum who needs a babysitter for her little boy. People can post notices using their smartphone, but they can only be read on the digiboard because we don’t want everyone to be glued to their phones all the time.'

'We’re looking for a longer connection between people than a fleeting conversation on the ferry', Celine adds. 'That’s what we’re aiming to achieve with the notices on the digiboard. If people respond and make contact with each other, a sustainable connection will be created. We’re just giving them a little push.'

Drawing inspiration from museums, the group also came up with the idea of integrating an interactive map into the floor of the ferry. 'People can stand on a dot to find out more information about things they find interesting.' What does Zeeburgereiland have to offer? What are the best local restaurants? People will also see interesting facts about the neighbourhood or a piece of history.

Saving coffee points
Nicole, Kylie, Jennifer, Sven, Benthe, Manon and Roni in team 2 also came up with a digital platform in the form of an interactive screen, but the way in which it works is completely different. ‘Smart Together’ offers people the opportunity to play contemporary and old Dutch games with fellow passengers using free WiFi and their own smartphones in the middle of the ferry. People can also save coffee points, read the newsletter, look at hotspots in the neighbourhood or take part in neighbourhood opinion polls. Roni and Berthe provide more details: 'Even without a mobile phone, people can still play games in an analogue way. And locally run coffee stalls are located on both wharfs.' The team encourages passengers in a playful manner to deposit their empty coffee cups in the rubbish bin.

Peter Blummel, environmental manager at the municipality of Amsterdam responded enthusiastically: 'Your idea of making the ferry a place where people can drink coffee is really great. It will create a moment of relaxation and will indeed bring people into contact with each other. And you can do many different things using the platform. Things like saving coffee points: it’s the small things that will contribute to an enjoyable ferry experience.' He also finds the digiboard and floor map created by team 1 interesting ideas: 'Many people in such a new district are in the process of discovering who the other residents are and how they can help each other. I believe that a floor map is a good talking point on the ferry.'

Temporary settlement
Aside from the above, many more great experience concepts were developed, which will contribute to building a pleasant and liveable Zeeburgereiland. One such concept is SluisBox, an intergenerational jukebox that will play the collective music tastes of the islanders, which people can listen to in a park together. And Sluisdorp, a temporary, movable settlement offering music, food trucks, a playground, games, an interactive wall, a market, a stage, a pub, a book corner where workshops will also be held and a sports corner. Plus Waste = Food, a sustainability experience accessible to the public featuring ‘edutainment’ for and by residents of North Amsterdam, where people can learn from each other how to recycle food. The latter concept was developed by the Urban Leisure & Tourism Lab (ULT Lab).

Sharmilee Jayakkumaran, urban designer at the municipality of Amsterdam, is eager to implement a number of ideas. 'What I really appreciate is that we’ve learned a lot from each other during this process. This educational concept is so valuable.'