Aquilo Delft: the first step in your space career 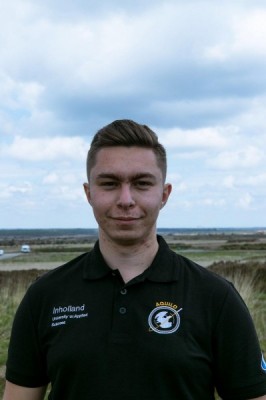 A group of rocket enthusiasts at Inholland University of Applied Sciences in Delft started the Aquilo team in 2014. What started as a graduation project has grown into a full-blown team. And every year, this team builds lightweight rockets from composite materials such as glass and carbon fibre. Every year, new motivated students from the Aeronautical Engineering and Aeronautical Technology programmes join the team. Daniël Oprea is this year's team manager: "This year we are once again super motivated to launch the rocket into the air.”

The team has built 9 rockets so far. And with each rocket, the team learns from the mistakes they have made, striving for improvements for the next one. Each year, the team also decides what the focus of the Aquilo rocket should be. Daniel: "This year we are developing a rocket with two motors. After the rocket has been launched into the air, the first rocket will break away after a while. Then the second rocket will take over." Technological progress goes hand in hand with this principle. The team is looking forward to the future. Not all targets are finalised because the new members can also influence the course.

Science and technology abroad
"We are currently still working on the Aquilo Rocket VII. This rocket was supposed to be launched last year, but unfortunately, due to corona and the many measures, it did not happen and we had a lot of delay." Therefore, Daniël hopes that in March 2022 the rocket will be launched in Poland. "This year, for the first time, we have chosen to have it abroad. In Poland, things are a little easier because of the regulations in that country." Aquilo VII will be shot some 10 kilometres into the air. The team will also participate in Euroc - European Rocketry Challenge in Portugal in October. Here, 20 teams (400 students) will get the chance to showcase their design and promote science and engineering. " We are taking the opportunity to make ourselves more visible abroad as well."

More knowledge about space travel
At the moment, the team consists of 23 members from different backgrounds. "At first the team consisted of 90 percent Dutch students, but we are starting to see more and more international students completing the team." Daniël has noticed a lot more different ideas coming up and a substantial increase in creativity. "We have a lot of fun together and also work very hard. It really is a team of motivated students who, in addition to their studies, also want to gain knowledge within the space industry." In their courses, the students primarily gain a lot of knowledge about aviation and everything related to it. For students who also want to gain knowledge in the space industry, Aquilo is a good match.

Gaining work experience in composites
According to Daniël, the best thing about working at Aquilo is the work environment. "I feel very safe within the team. You learn to work with different composite materials in the Inholland Composites Lab. You learn how to work with this material and gain work experience at the same time. You often don't get this opportunity at other universities of applied sciences or study programmes."

Do you want to become a member of Aquilo?
Would you, as a student, also like to participate in the Aquilo team? That is certainly possible. At the end of the academic year, any student of the technical courses in Delft can sign up for this on the website.