Full steam ahead for DragonFly despite coronavirus

Students are continuing to exercise their creativity from home 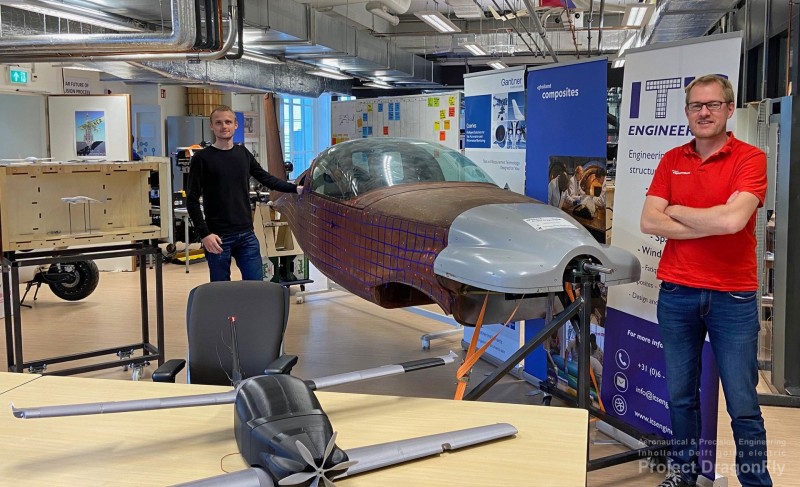 In recent months, students Aeronautical Engineering have proved that they are just as versatile as the electric aircraft they are building. Development of the aircraft as part of Project DragonFly started at Inholland Composites in Delft in October 2019 and has not stopped since: coronavirus or no coronavirus!

Mark Ommert is the Project Manager for Project DragonFly and used to be an Aeronautical Engineering student himself. He talks enthusiastically about the project, in which an average of 15 students are involved. ‘The programme has been able to develop a broad network in recent months. The fast pace of developments means that major breakthroughs in electric propulsion are set to happen throughout the world in the near future. I’m pleased to say that projects like ours have a very important role to play.’

The website for Project DragonFly went live in May 2020. A feasibility study and technical research were carried out on the construction too, says Arnold Koetje, Programme Manager at Inholland Composites. ‘The government wants the industry to have switched to climate-neutral aviation by 2070, so it is important for us to quickly familiarise ourselves with the technologies that this will require. Electric motors are part of the solution.’

Creative challenges
Luca Baak is one of the students who is involved in Project DragonFly. His final research project focuses on the design for the engine mount in the front of the electric-powered DragonFly - it keeps the electric motor, motor controller and batteries in place. This presented Luca with a whole host of challenges. ‘I had to be very creative. There isn’t much literature on the subject, because it’s not something that’s been done a lot before; electric aircraft are still few and far between at the moment. So, I had to base my design on photos, amongst other things.’

Luca says that some of his fellow graduating students have had to set up workshops at home, to be able to physically test the various aircraft components. He hasn’t had this problem; an advanced design program on his laptop enables him to do his part of the project - which is handy given the current coronavirus crisis. ‘There’s nothing I can’t do: running strength calculations, deciding on the best design and making sure the ultimate design complies with all relevant regulations.’

Luca says that he has learned a lot about project management recently. ‘Working from home, there’s less informal contact between me and my supervisor and lecturers. I can’t quickly ask them a question as I pass them in the hallway, which I would have done normally. So, I have to find the answers I need myself. It’s even more important to make clear agreements about meetings and the next steps to be taken now too. The same applies for self-discipline, because this ensures that you continue to be productive while you’re at home.’

There are just a handful of electric-motor manufacturers worldwide, so it’s very special for us to be working with a Dutch player.

Widely known
The work being done as part of Project DragonFly has come to the attention of parties in the Netherlands and abroad, says Project Manager Arnold. ‘One of these was Saluqi Motors, an Eindhoven-based company that develops electric motors for the aviation industry (and other industries). It says that this type of aircraft is the perfect “airframe” in which to test one of its first electric motors. There are just a handful of manufacturers worldwide, so it’s very special for us to be working with a new, Dutch player.’

Designing, building, testing
The coronavirus crisis is hitting the aviation industry hard, but that doesn’t mean that Project DragonFly will suffer too, Arnold Koetje says. Quite the opposite actually. ‘We stand to benefit from the fact that big companies are facing difficulties and cutting back their research as a result. Also, attention is currently shifting from the subject of aircraft maintenance and more to the designing, building and testing of aircraft - the aspects we focus on here in the Aviation Technology programme.’

Full steam ahead for DragonFly despite coronavirus