A group of second-year students International Media and Entertainment Management has been working on the first edition of ‘The Hague Film Awards’, hosted by Gemeente Den Haag and Culture Clash4U at Filmhuis Den Haag on 17 February 2018. 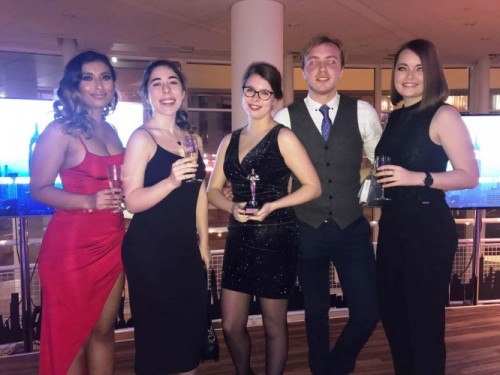 Their collaboration with Gemeente Den Haag and Culture Clash4U started out as a NEWb assignment. The students started out by setting up a content promotion plan, which focused on targeting young video makers to participate in the contest and the award show. The award show is divided in five categories: Documentary, Short Film, Vlog, Animation and Music Video.

After this step, the students planned the content of the award show together with the clients. After the submission deadline of the video contest passed, the students nominated the best videos for the upcoming award show. Contestants can win € 500, which can be spend on a future profession in this field. Besides the money, the winning film will be screened at Filmhuis Den Haag for a month! During the award show itself, short documentaries, vloggers, music videos and animations will be shown. During the show, on February 17, the IMEM-students will be working as stage managers and front runners.

More information about The Hague Film Awards can be found on the Facebook page.