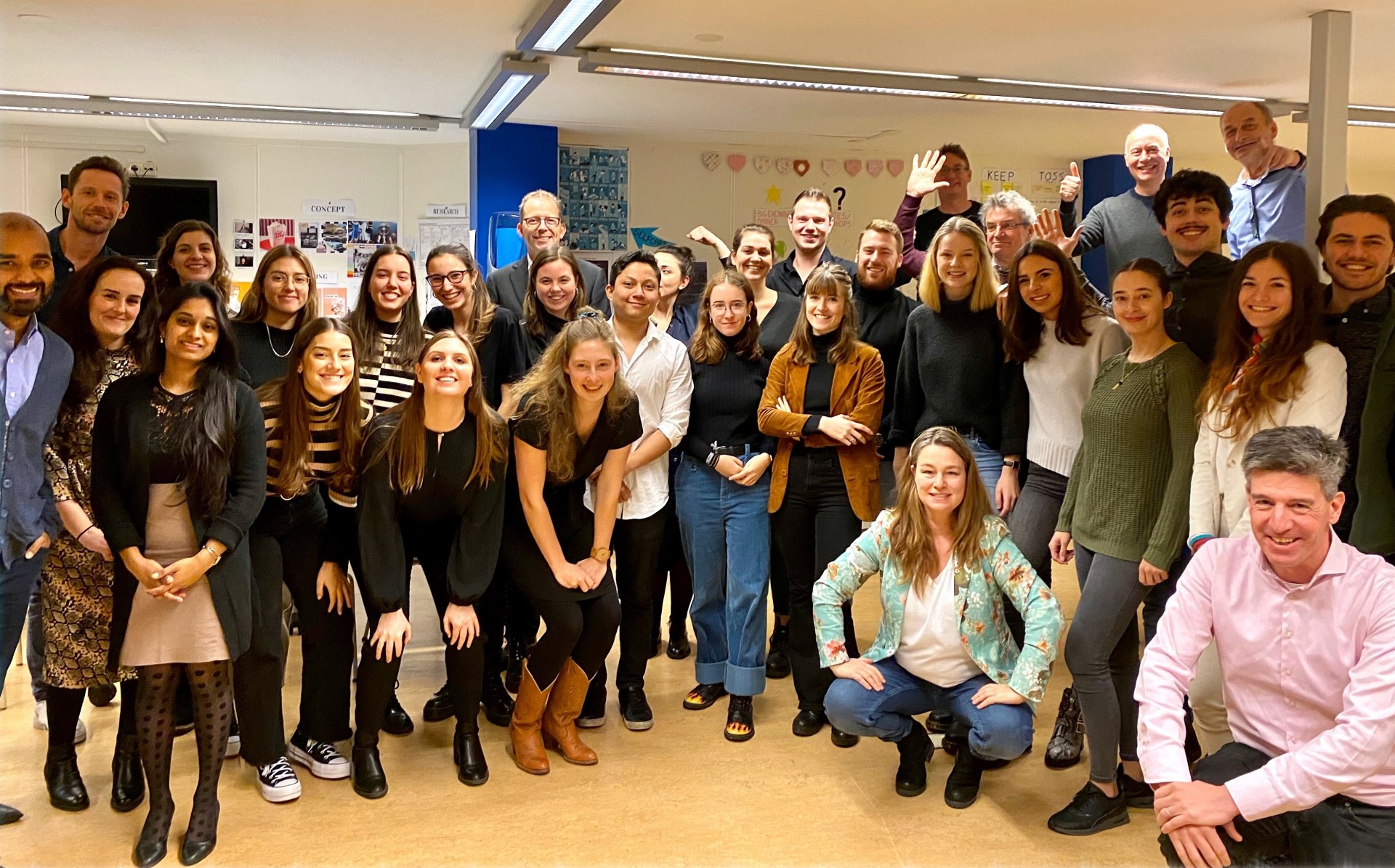 After a semester of in-depth research and a wealth of ups and downs, a group of 26 third year students ultimately brought the Creative Growth Initiative (CGI) in Diemen to a successful conclusion. At the request of and in conjunction with Amsterdam City Council, the students looked for solutions to wicked problems in the future Sluisbuurt district of the city, where Inholland will be based as of 2022.

Students from the Leisure & Events Management, Tourism Management, Facility Management, Creative Business and Communication programmes tackled the issues together with a number of international exchange students. Whereas previous CGI groups had restricted themselves to designing a prototype for a future playground, this remit was broader: find a temporary purpose (placemaking) for specific locations in the Sluisbuurt for a 10-year period.

Vibrant and dynamic
The Council anticipates that it will be 10 to 15 years before the new Sluisbuurt district is fully developed. How can you make a new district of this type vibrant and dynamic in the meantime? How do you get residents to be active or encourage them to engage with each other? What can you do at cultural level? In a nutshell: how do you make a district that is still being built an attractive place to live in and work in?

After two terms of hard graft, the students came up with a wide range of solutions, ranging from a climbing wall that feels more like a skyscraper to a geodesic dome that is used for student projects, as well as events and productions for various target groups.

Freedom
CGI consists of an individual track in which students conduct their own research, and the creation of a prototype for the real-world partner. The latter is a group activity. Under CGI’s active learning approach, students are given the freedom to choose the direction that they wish to take. And, as crazy as it may sound, they often find this quite difficult. 'It was hard to start with because we didn’t really understand what was expected of us. Normally, we're given a briefing with clear guidelines. We asked our learning coaches "what exactly are we aiming to do here?" But that’s not how CGI works: it’s all about discovering things for yourself and adapting accordingly', says Communication student Robin de Jong.

Learning coach John Tielman, who teaches on the Business Innovation programme: 'This is a new form of learning that students sometimes find it hard to identify with. They were amazed what they learned from experimenting. Before they started, some of them thought it would all be plain sailing but there were a few heated discussions and a few tears were shed before real growth and results could be achieved.' His colleague Esther Bouw, who teaches on the Leisure & Events Management programme, adds this: 'We just wanted them to start somewhere, to make choices.' Every week the students gave a presentation to each other. 'That also meant that sometimes they had to admit that things weren’t working and they needed help from the rest of the group.'

Feedback
'Giving presentations to each other was great; you know exactly where you stand, whether you’re ahead of or behind the other teams, in terms of the research that you do in the initial phase, for example', says Tourism Management (NL) student Stefan Stuijvenberg. They also gave each other feedback. 'Being open with each other isn’t easy, not everyone has the courage to say what they think. Some people think: who am I to give my opinion, what do I really know about it? Luckily, I don’t have a problem with that myself. And if my peers are having problems, I try to ask the right questions to help them find a solution.'

'The learning journey is key', says Esther. 'For example, we had a group that initially developed a sports complex that would have been far too expensive. When they presented the initial concept, Amsterdam City Council said this: is it really the intention that this won’t be here for more than 10 years? This was hard for them to take, because it meant that they had to radically revise their original plan. It really is ‘kill your darlings’, and that’s not easy! Placemaking must be accessible and affordable.'

Classic cars
Robin’s team came up with about twenty concepts but, ultimately, they were left with only one. 'We thought to ourselves: what do we as students like doing? Answer: going to the cinema with friends. Our cinema is a cinema with a difference: it’s a drive-in, but with permanent cars, real classic cars, combined with a great classic movie. Really it was too expensive for placemaking but we decided to present it anyway. The Council was very positive about it. They’re now thinking of making this cinema a permanent feature in the Sluisbuurt.'

The Creative Growth Initiative fits with Inholland’s vision of producing graduates who have a wealth of knowledge and experience and who understand human values. The Inholland professionals who graduate from the University make society healthier, more sustainable and more creative, take the human dimension into account and care about society. They learn mainly through doing and seeing what works. They embrace technology and change but don’t lose sight of the human dimension. Inholland professionals work creatively and learn how to deploy new technologies in a useful way.

Never miss news from your Creative Business faculty again?
In100 film Inholland The Hague
'The entrepreneurial mindset brings me great things'
'Creating sustainable change on the red carpet'
Doing business and studying? It's possible at Inholland!
Join the Community Day of the Sustainable Media Lab