All aboard for Pride Amsterdam 2019! 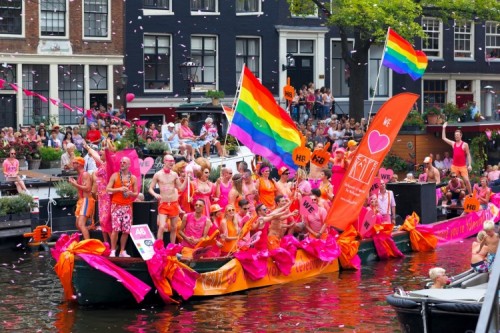 This year, Inholland will join AUAS (Amsterdam University of Applied Sciences), the UvA (University of Amsterdam) and VU University Amsterdam at the 2019 Pride Amsterdam Canal Parade. The event will take place on Saturday 3 August 2019. Want to join us on board? Complete the form below. Please note: space on the boat is limited!

Higher education is the driving force behind development, innovation as well as many key professions and services. We apply knowledge as a tool in the fight against ignorance, prejudice and misunderstanding. In addition to knowledge, we also share values, such as social equality for the LGBTI community. We want to show former, current and future students and staff that everyone is welcome to be themselves at Inholland.

Stonewall Riots
Each year, the Pride event is themed around a different issue. This year's theme is Remember the past, create the future. We will commemorate the Stonewall Riots, which broke out in New York 50 years ago and represent a watershed moment in the LGBTI movement's history. The world's first Pride Parade was held in New York in 1970, one year after the riots. See below for more information on the Stonewall Riots.

Space on the boat is limited. If the number of applications exceeds available space, participants will be selected on the basis of their motivation and a lip sync battle. More on that matter at a later stage. See below for more information on lip sync battles.

Of course, all other colleagues and students are welcome to cheer on our Pride Boat from Prinsengracht and get the party started on 3 August! Information and details for fans interested in cheering on our boat will be announced at a later date.

A kick-off lunch meeting attended by Chair of the Executive Board Jet de Ranitz will be held in Diemen at 12:00 on Tuesday 16 April. Here, you will have an opportunity to become familiar with the Inholland participants and receive important information on the latest developments. A festive introductory drinks session attended by all AUAS, UvA and VU participants will be held in Amsterdam this June.

We will work with our colleagues and fellow students from AUAS, UvA and VU to make this year's event another resounding success. Among other activities, we will perform a special act together. This year, NOS will broadcast the event live on television for the first time, so make sure to let your friends, parents, aunts, uncles, and grandma know all about your upcoming five minutes of fame!

All aboard, wave your Rainbow flag and show your Pride!

All aboard for Pride Amsterdam 2019!
More news