The sky is not the limit 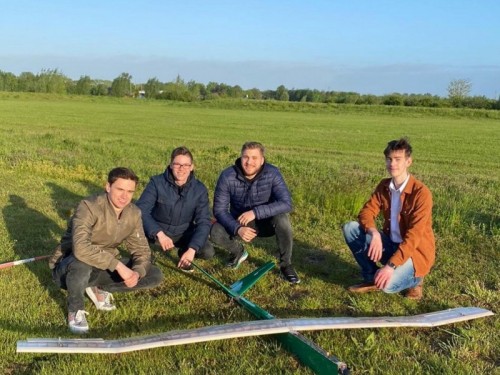 After 16 weeks it was finally time; the self-designed gliders built by Aeronautical Engineering students of Inholland University of Applied Sciences in Delft took to the air. One of the students, Robin Mens, and his team (High Flyers) had their glider reach a height of 110 metres. “We learned so much, from start to finish. It was a very special project to be part of.”

Robin has been fascinated with technology from an early age. According to him, the Aeronautical Engineering programme in Delft includes all aspects that are important to him. Robin is fascinated with motorsport. He hopes to eventually start his career in this industry. “I already have connections with engineers who work in different Formula 1 teams. It would really be a dream to make it in this industry.”

The start of the project
Each year, Aeronautical Engineering students start two projects. One major project is the Design, Build & Test (DBT) project. In 16 weeks, 14 groups of students build different gliders that can reach a height of 100 metres within 120 seconds. The glider that stays in the air the longest wins that year's competition. Robin's group got to work with this information. “We started by coming up with different concepts. Everyone had to come up with their own concept. Next, we looked at which individual elements we could use for the final design.”

Selection of materials
Each group applying an innovative design receives additional points. To earn these points, the High Flyers team chose a unique tail wing for the glider. “We finally decided on a V-Tail. It was difficult to develop, but in the end, we put in a lot of time to get it done.” All groups received a budget for the purchase of materials. “For the selection of materials we had to take into account two aspects; it had to be strong enough, but also lightweight.” The team decided on balsa wood and plywood. Balsa wood is twice as light as plywood and is mainly used for parts that need to withstand less force.

Time pressure
After the design phase, the construction phase started. “We experienced a great deal of time pressure. No one in our group had any construction experience. That made it very tricky at times. So we quickly ordered the materials and just started building, in order to get a better feel for it.” By building the aircraft, the project was a very nice mix between theory and practice. “The DBT project is not just about entering data into computer programs; we really had work with materials.” Unfortunately, the pandemic was the cause for the construction days not always running as smoothly as we'd liked. “We split up the group; three of us worked at school. The others contributed to the calculations from home. We kept in touch through MS-Teams.”

Ready for take off?
And finally, the test phase in which the entire aircraft is examined and technically inspected. The test day is also the competition day, so there is no more time to adjust the aircraft. If you don't fly, the team is eliminated. “It is a very important, crucial moment, everything has to go right on the day. Because a lot of wind had been forecast, we had to assemble in Oosterhout at six o'clock in the morning. I only slept three hours myself.” Every team was present that day. The wind was getting stronger by the minute. Robin's team was the last team. “In the end, our plane made it well over 100 metres. I was super proud of us all.” Unfortunately, the plane did not survive the landing. But the result speaks for themselves. Team Highflyers took first place: Best Overall Project.

Looking back
Looking back on the project, Robin is very satisfied with the result achieved. “The collaboration was difficult at times. Normally you all work on a report at school. This was so much more! It was rather complex and took a lot more time. I have learned that it is very important to maintain good communication, from start to finish.”

The sky is not the limit